CALL FOR PAPERS: “Translation in Science, Science in Translation”

In recent years, considerable scholarly attention has been drawn to interdisciplinary research between the fields of Translation Studies and History of Science, which has shed light on, for instance, the workings of scientific communities, the dissemination of knowledge across languages and cultures, and the transformation in the process of that knowledge and of the scientific communities involved. Translators are brought to the fore, and if they were once treated as anecdotal actors in scientific exchanges, they are now understood as key agents. The Translation in Science, Science in Translation conference precisely engages in all these questions suggested by the conversation between Translation Studies and History of Science, and understands language as a complex phenomenon that includes dialects, sociolects and disciplinary tongues, and science as encompassing the natural and the social sciences. The focus is from early modernity to the present, and the conference’s translational perspective also applies to movements across disciplines, and to communication between scholars and lays (Montgomery 2000, Elshakry 2013, Olohan 2014).

We particularly welcome proposals from scholars and PhD students working on regions and languages underrepresented in research on the following topics:

1. Scientific Translation over Time and Space

2. Behind the Scenes: Actors and Strategies Involved in Scientific Translation

Proposals
Please submit an abstract of no more than 350 words along with a bio-bibliographical note (as a single PDF-file) by 31 July 2016 to translationinscience@gmail.com.
There are a limited number of grants to cover travel and accommodation expenses. Should you wish to be considered for one of these, please submit a short letter of motivation.

Organization
The conference is organized by Katharina Kühn (International Graduate Centre for the Study of Culture, University of Giessen), Dr Rocío G. Sumillera (Universidad de Granada), and Dr Jan Surman (Herder Institute, Marburg), in collaboration with the International Graduate Centre for the Study of Culture (GCSC), the Giessen Graduate School for Humanities (GGK), the Giessen Centre for East European Studies (GiZo), the Herder Institute for Historical Research on East Central Europe – Institute of the Leibniz Association, the Department for Cultural Studies at the University of Rijeka, and the University of Granada.

CALL FOR PAPERS: The Histories of the Morris in Britain 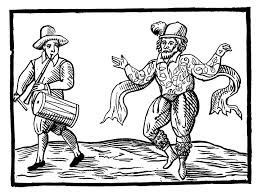 Organised in partnership by The Historical Dance Society with The English Folk Dance and Song Society and The Morris Ring, The Morris Federation, Open Morris.

The focus of the conference is morris dancing in all its forms (including rapper, long sword, molly, and other ceremonial dance) within the British Isles and its history up to recent times. As an enduring feature of British culture across more than six centuries, research in, and understanding, appreciation and practice of, our vernacular dance genre is worth celebrating. We invite contributions from practitioners and scholars to this two-day event to share practice, archival research, oral history and local custom. This may be in the form of papers and talks for 30 minute slots to include discussion time, or workshops of 90 minutes, or posters. We hope to publish selected papers in a volume of proceedings.


Topics: the following suggestions are offered as a guide and further relevant ones will be of interest.

Please send your proposal (with a 300 word biography), stating whether for a paper, workshop or poster to: Anne Daye conference@thds.org.uk or 96, Dover Crescent, Bedford, MK41 8QH by 31st August 2016.

CALL FOR PAPERS: Nomadic Objects: Material Circulations, Appropriations and the Formation of Identities in the Early Modern Period (16th-18th c.)

This interdisciplinary conference, organized by the Universities Sorbonne Nouvelle, Paris Diderot, Paris Ouest Nanterre La Défense, and Paris 13, in partnership with two museums of the Paris region, the Musée National de la Renaissance in Écouen and the Musée Cognacq-Jay in Paris, and supported by the Ile-de-France Region, seeks to confront the material history of early modern objects with their artistic and literary representations.

It proposes to look at the various “traces” left by material culture as it circulated and was appropriated. Studying the history of material culture (be it dress and personal accessories, everyday and decorative objects, art works, and technical, scientific, or musical instruments…) sheds light upon the various processes of cultural appropriation, transculturation or hybridization that accompanied such material circulations across Europe or between Europe and the rest of the world. Material objects, whether commodities, tools, devotional objects or works of art, can all be considered as bearers or vehicles of cultural identities. By travelling across space they call into question national, religious and linguistic boundaries.

The early modern period (1500-1800) corresponds to a period when national identities became more firmly entrenched in Europe with the definition of clearer national territories, languages and religious traditions. The establishment of such boundaries resulted from the development of a new political philosophy, born in part in reaction to Renaissance court culture and its intrinsic nomadism (A. M. Thiesse, La Création des identités nationales, 1999).  Following the trajectories of objects as they crossed these boundaries brings into focus the tension between sedentariness and nomadism that Daniel Roche identified as a key element in the advent of modernity (Humeurs vagabondes, 2003).

In addition to the tight network of material circulations within Europe linked to trade, diplomatic exchanges, aristocratic modes of life or religious exile at a time defined by intense religious and political strife, more complex trajectories yet are to be traced. In the context of proto-globalization and of the rise of international trading companies, goods often followed global paths, coming from distant locations and transiting through a number of countries or cultural spaces before reaching their destinations. Because these objects found their way into artistic and literary representations, they also generated in turn less material forms of circulation, posing the question of multi-layered processes of appropriation.

We are seeking proposals that address such processes of circulation and appropriation by looking at the reception of these objects in literature and the arts or at their production and consumption, and the craftsmanship, techniques or practices thereby implied.

Suggested topics include, but are not limited to:

We hope that this conference will bring into play a variety of methodologies and foster a fruitful dialogue between different disciplines (History, Material Culture, History of technologies, Art History, European Languages and Literatures, Anthropology, Archaeology…). Outreach activities, such as workshops and round-tables open to the general public, will also be included in the program. We welcome proposals from established scholars, doctoral students, curators and other professionals working on or with early modern objects. We particularly encourage proposals discussing objects in the collections of the Musée de la Renaissance or the Musée Cognacq-Jay.

300-word proposals, along with a brief CV (1 page maximum), should be sent by September 15, 2016 to the conference organizers at objetsnomades2017@gmail.com