The Liverpool Centre for Medieval and Renaissance Studies is delighted to invite you to a special guest lecture by Richard L. Kagan, Arthur O. Lovejoy Professor of History, Johns Hopkins University:

"The Spanish American colonial city is often distinguished by its central plaza or square. These spaces still serve as the focus of urban life. But how did they come into existence? What purposes did they serve? Using maps and city views dating from the colonial era, this lecture explores the various meanings attached to the plaza, the differing ways they were used, together with their representation in both literature and art of the colonial era."

The lecture will take place on Tuesday, 24 January 2012, and start at 5.15pm in the Boardroom (no.104), Department of History, 9 Abercromby Square, University of Liverpool, L69 7WZ. Refreshments will be available beforehand.

All welcome! It would be a great help, though, if we were able to gauge numbers. Please, be so kind as to notify the convenor if you intend to attend Professor Kagan’s lecture: h.e.braun@liv.ac.uk. 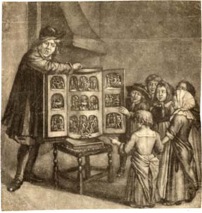 Plenary Speakers:
Professor Julie Sanders (Nottingham)
Professor Tiffany Stern (Oxford)
This one-day academic conference aims to bring together scholars working on all aspects of performance in the early modern period (taken broadly to include the fifteenth to the early eighteenth centuries). We intend to interrogate what performance and its related terminologies and practices might have meant to early modern readers, playgoers, and congregations; how performance shaped and/or undermined distinctions between private/public bodies and selves. Although drama is an essential point of reference for this discussion, we encourage that “historicizing performance” be taken as broadly as possible. Topics might include (but are not limited to):

- Performing gender/ sexuality/ the domestic
- Performance and the performative in theory

Please email abstracts (400 words max.) for a 20 minute paper to Michael Durrant and
Naya Tsentourou at: Historicizing.Performance@manchester.ac.uk
Deadline for abstracts: September 23th, 2011
Notifications of acceptance to be sent out by October 14th, 2011

Registration: £10
Speakers and guests are invited to join us for dinner at a local restaurant; to book a place please let us know when registering (dinner not included in the registration fee).

The Society for Renaissance Studies has granted us bursaries to help postgraduate students with the costs of travel and accommodation. If you want to be considered for one of the bursaries, please let us know.

To book a place at this event please contact Michael Durrant and Naya Tsentourou at Historicizing.performance@manchester.ac.uk by 7th January 2012.

The event will be taking place at the Seminar Room of the historic building of the John Rylands Library at Deansgate. Due to limited space, please register early to avoid disappointment.

We hope to see you there!


The purpose of EMPHASIS (Early Modern Philosophy and the Scientific Imagination) is to provide a London forum for scholars working in the history of philosophy, intellectual history and the history of science of Europe in the period 1400-1650. The term 'philosophy' is interpreted in its fullest Renaissance sense, and includes such themes as: Neoplatonism, scholasticism and late Aristotelian philosophy, Epicureanism, stoicism, scepticism, cosmological theories, the classification of the disciplines, encyclopaedism, Lullism, the art of memory, the philosophy of mathematics, theories of the soul, theories of language and signs, etc.

Collaboration, Authorship and the Renaissance: Early Modern and Postmodern Perspectives

For further information (e.g. re: travel, accommodation) and to book a place, contact the organisers (Conor Smyth and Kevin Murray) at: collaboration2012@qub.ac.uk as soon as possible.

Worlds of Paper Writing Natural History from Gessner to Darwin

This international conference aims to bring scholars together to discuss how practices of processing written information have shaped conceptions of the natural world in the past. From the sixteenth century until well into the nineteenth century, naturalists strove to collect, observe and classify animals, plants and minerals, often with their medical and economical use in mind. The printing “revolution” and the discovery of America profoundly transformed literacy and scholarly practices of reading and writing. The day‐to‐day practices of assembling information on natural objects and their medical properties can be glimpsed through the numerous marginalia, commonplace books, notebooks, files and index cards that naturalists, physicians, and apothecaries have left to us. The conference will investigate how these practices acted as powerful tools which changed conceptions of the order of nature. Early modern writing practices ultimately influenced taxonomical procedures, the developing idea of relationships within nature, and, in the long run, concepts of biodiversity and bioprospecting.

For more information about the conference, details of accommodation and directions to the Linnean Society, please contact:

Abstracts are invited for papers towards linked panel sessions at the
American Historical Association Annual Meeting (Chicago, January 5-8,
2012). The panels will explore the overarching theme of 'Ethnography,
Ethnology and Science, 1400-1800.'

The historiography of science leaves ethnography and ethnology before the
nineteenth century largely unexploited. This distorts earlier knowledge-
making practices, particularly in the fifteenth and sixteenth centuries.
European observers in distant regions often integrated discussions of human
societies, flora, fauna, climate and natural resources within an all-
encompassing natural history rooted in the traditions of classical antiquity.

These panels will seek to contextualize European attempts to understand
distant peoples within broader investigations of natural history and
cosmography. They might investigate the interconnections between, for
example, the following:

* ethnological ideas and theories of climate;
* animals and humans by way of monstrous peoples;
* practices of empirical ethnographic observation and methods for collecting, describing, organizing and analysing new plants and animals;
* communities and networks of practitioners working on ethnology, natural
history, cosmography and other branches of knowledge.

Also of interest are such issues as the authority of eyewitness testimony, the
changing status of different practitioners, and the part played by scientific
knowledge in shaping ethnology. The overall aim of these panels will be to
re-think the relation between the histories of ethnography and ethnology,
and the history of science, in order to better explain European attempts to
understand the wider world c. 1400-1800.

Scholars who would like to submit an abstract to these sessions should get in
touch with the organizer (Dr Surekha Davies, Birkbeck, University of London,
ats.davies@bbk.ac.uk), to express their interest and to discuss possible
submissions, by 1 December 2010. Abstracts and short biographies in line
with the AHA submission requirements would be needed by around 10
January 2011. The deadline for submitting the panels to the AHA is 15
February 2011.