CALL FOR PAPERS: 'Dare to Tell': Silence and Saying in Ben Jonson

A conference in the 400th anniversary year of the publication of Jonson’s 1616 first Folio of Works.

World premiere of Ben and Jamie by Brean Hammond

What does it mean to be called into question, to speak out or to stay silent, to have innocent thoughts, guilty looks, or culpable dreams? Jonson’s plays, comic and tragic, foreground the processes of imaginative interpretation that condition people’s actions, values and their very being.

On this prominent anniversary of Jonson’s publication of his 1616 first Folio of Works, this conference will explore themes of publication and performance broadly conceived to include the following themes:

Please send your abstract of 300 words, along with a brief biography that includes your title and institutional affiliation, to jonson.conference@gmail.com no later than 26 February 2016.

The conference will also include:
General questions can be directed to the conference organisers Akihiko Shimizu, Julianne Mentzer, Peter Sutton, Rebecca Hasler and Zoë Sutherland at jonson.conference@gmail.com. 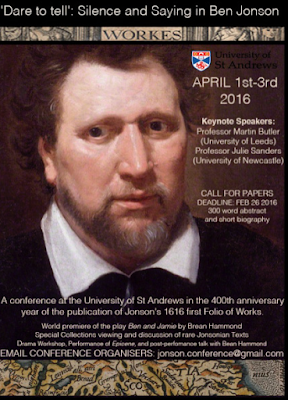